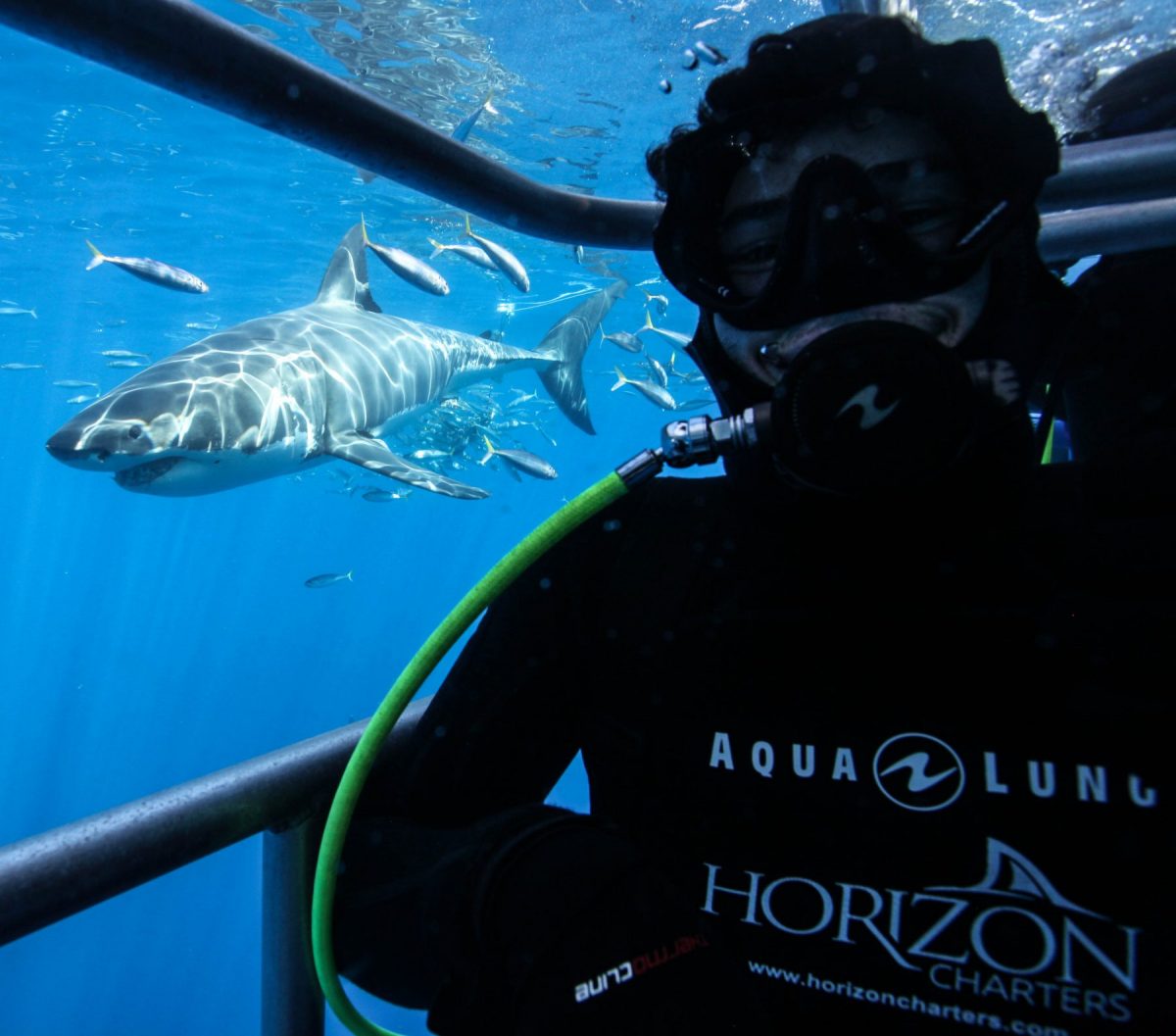 I’ve been home for two days from a five day liveaboard adventure with Horizon Charters and I’m still processing everything that happened. When I initially booked the trip I had a ton of questions and a few reservations as I was a female traveling alone for this trip, it would be my first time on an ocean liveaboard, (I’ve only been a river and lake diver up to this point), and I’d never even been out of the country before. Patric Douglas spent a good thirty minutes on the phone with me the first time I called, answering every question I had from how they operate on board and interact with the sharks, to putting my concerns about being a solo traveler to rest. The moment I booked this trip, my childhood dreams of cage diving with great whites finally became a reality!

Day one was travel day, and this company makes traveling out of the country as easy as possible. Since they don’t bus through Mexico, All you have to do is show up with your passport at the dock in San Diego, hand it over, and they take care of the rest as we pass through customs in Ensenada. The ocean also showed me its true power. I was down and out all day with sea sickness, but even as I went through it the crew and even the guests repeatedly checked on me to make sure I was still holding up.

Days two, three, and half of four are when the main shark diving action happened. By the end of day one my expectations were blown out of the water as we saw thirteen sharks, and we had multiple shark sightings every dive. By the end of the three days, I had logged ten 45-50 minute dives, and to top it off, my very last dive marked my 100th dive as a scuba diver! I can’t think of a more incredible way to spend my 100th dive than underwater with great whites!! Lalo Saidy, the dive instructor on this trip, even captured a breathtaking photo of me with a shark smiling right behind me on this dive! All in all, we saw 28 different sharks on this trip, and I was just giddy with excitement and awe inspired by these incredible animals the entire time. When you book with Horizon Charters, you will not be disappointed, and I guarantee you’ll see sharks.

The latter half of day four and into day five saw us waving goodbye to Guadalupe Island and our new sharkie friends to cruise back to San Diego. I had no issues with seasickness on the return trip which I was very grateful for, (we also had one of the smoothest trips of the season heading back so that certainly helped)!

I can’t say enough about the shark crew. Each one of them love sharks and drive home the importance of conservation and make an effort to dispel the bad wrap sharks have unfortunately gotten over the years. You can tell they genuinely love being on board and maintain a lively atmosphere for the guests. Throughout the trip the Horizon crew also went out of their way to accommodate a pesky little fragrance allergy I have and made sure I never came in contact with anything that could cause a skin reaction. Even as a solo traveler, I never felt like an outsider on board. When I wasn’t talking with different guests and hearing their stories of what led them to this trip, I was laughing and talking with crew members!

As an avid shark lover, an even more special aspect of this trip was that it was lead by Shark Allies, a shark conservation group that has been instrumental in passing legislation to ban the fin trade and have gone above and beyond to educate people about sharks and work to change the public perspective on them. We also had Dr. Chris Lowe, Marine Biologist and great white expert, on board with us. Having the opportunity to listen to these individuals share information on sharks and what the future looks like for them and even have one on one time with them is something I will cherish forever.

This experience has been an adventure I will never forget. I was only there for five days, but I’ve left the M/V Horizon with a lifetime’s worth of stories to tell!