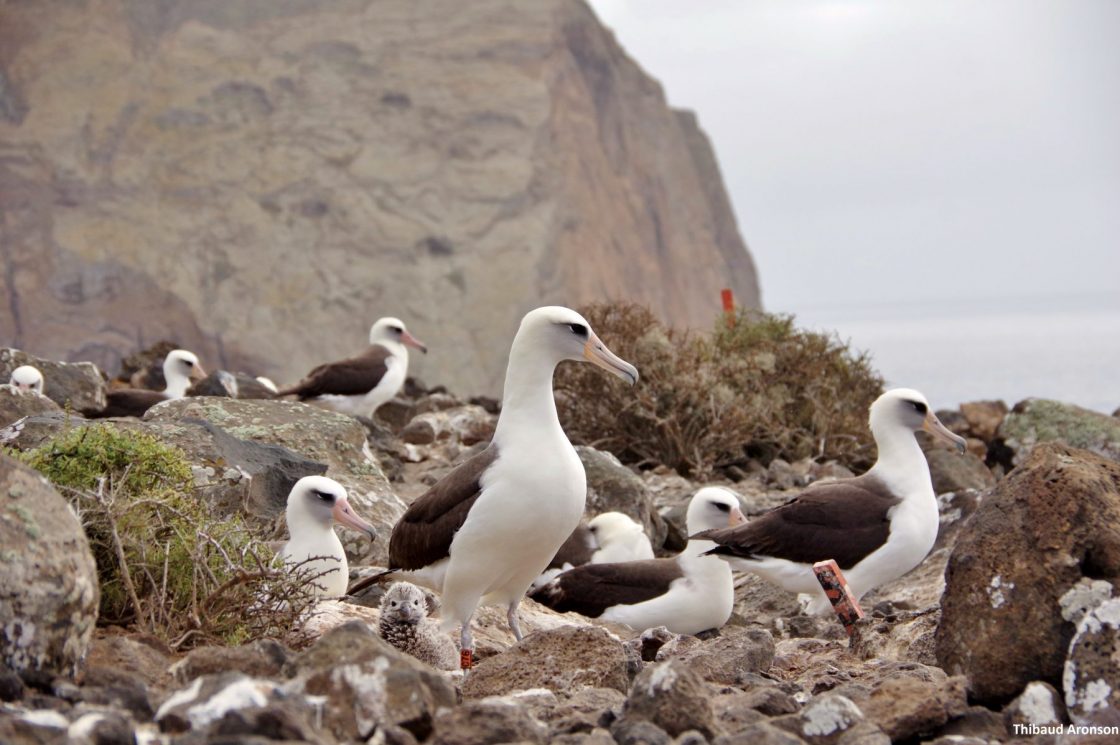 Guadalupe Island is a large volcanic island (250 km²), 240 km west of northern Mexico, with fewer than 150 permanent inhabitants. Over the past 18 years is has become a focus hotspot for cage diving with great white sharks but as you will soon learn it is a whole lot more.

Approximately one-fifth of the island’s 150 native plant species are endemic. Of particular interest are the remnant populations of trees in the foggy, northern highlands of the island, including an endemic variety of Monterey pine (Pinus radiata var. binata), and the endemic cypress.

Three additional tree species survive in small populations : an endemic oak (Quercustomentella), California juniper (Juniperus californica) and an endemic fan palm (Braheaedulis). At the southern end, there are remnants of both chapparal and matorral shrublands including taxa with Californian affinities and others from the Sonoran desert biome. The southern tip is very dry – with just 120 mm (5 in.) of mean annual rainfall. The northern half is mountainous with 250 mm (10 in.) of annual rain, and thick fogs that double or triple the effective precipitation.

People first came to the island in the early 19th century. By 1850, sailors had introduced goats to provide a meat reserve for passing ships. Not surprisingly, the goat population exploded, reaching an estimated 100,000 animals by 1870. Over-grazing led to the disappearance of entire plant communities and several dozen endemic species. One example is Hesperelaea palmeri, an endemic member of the olive family. Particularly appreciated by goats, it was gone by 1870. Domestic cats got to the island somewhat later, probably introduced intentionally to control the mice. The cats went feral, and had an enormous impact on the extremely tame birds, both endemic land birds, and breeding seabirds.

By the early 20th century, 6 of the 9 endemic land birds had gone extinct, as well as an endemic seabird. Meanwhile, the Guadalupe fur seal and the northern elephant seal were hunted relentlessly, the former for its fur, the latter for its blubber. The hunting only stopped in 1894, when both species were thought to be extinct. Happily, both species did in fact survive, albeit in extremely small numbers; the entire fur seal population dropped to 15 individuals. In 1928, the island became a set-aside reserve and seal populations finally started to recover, and today, they number 20,000!

On land, however, things kept worsening. The goat numbers stabilized around 15,000. As a result of over-grazing, most of the island was stripped to bare soil and rocks; only a few hundred trees survived and goats ate every seedling they produced. Cats caused enormous mortality in breeding seabirds and one of the remaining three endemic land birds, the Guadalupe Junco (Junco insularis), was headed towards extinction, with only 50-100 individuals left.

That’s when the Group for Ecology and Island Conservation (GECI) got in gear, and it’s thanks to them that things are looking up. Since 1995, this NGO has eradicated 48 populations of invasive mammals – mostly sheep, goats, cats, and mice – on 30 Mexican islands. They got to Guadalupe in 2002 and started an intensive eradication campaign. By 2007, the goats were gone. Within a year, the trees had produced thousands of recruits, which today are several meters high, in the case of both the pine and the cypress. In fact, in 2008, a fire burned through a large portion of the remaining stand of cypress. A few years earlier, this would have been a catastrophe. But without goats to eat them, thousands of seedlings sprouted immediately all over the burnt area and are growing nicely, thanks not only to the absence of goats, but also  to the heavy fogs, which provide favorable conditions for the seedlings. Besides, half a dozen native shrubs, including some endemic species, have reappeared in large numbers  in many parts of the island. Several species which were though extinct have been rediscovered, and one new species has been discovered as well.

All is not well, however, in the invasives department, nor in soil conservation. Dozens of species of herbs and grasses from the Mediterranean Basin and Europe are prevalent in open areas, and there are dramatic signs of soil erosion. Former shrublands – matorral and chaparral – are deeply degraded everywhere on the island. Half a dozen species of native shrubs are re-colonizing certain areas and acting as very effective pioneer species. These are being watched and probably can be used in active restoration efforts in the future.

Feral cats and several kinds of mice are still present and continue to prey on birds. However, a fence now protects the southern tip of the island, which is home to a breeding colony of the Laysan albatross, one of few albatross populations in the world which is growing in numbers.

To date, GECI has focused on eradicating invasive mammals, mainly to protect marine birds. The regeneration of the island’s vegetation was a happy by-product. However, they are now seeing the potential for taking a more active hand in restoring the islands’ plant communities. We suggested several approaches. One would be the establishment of plant nurseries to support both ex-situ conservation and reintroduction of plants within experimental plots set up to study what approaches are most effective for different plants, in different parts of the island. There are only 30 to 40 adult oak trees left on the island and less than 10 known Junipers. Unlike the endemic cypress, pine, and fan palm, neither the oak nor the juniper is recovering. Active intervention will be needed to reconstitute mixed conifer-oak woodlands and to bring the fan palm populations back to their former glory. Finally, some heavy work is needed in relation to water and soil management, and roughly 400 feral domestic cats still run free on the island. Total eradication will be extremely costly, but GECI hopes to achieve it by 2025. As is the case in Madagascar, and Sri Lanka, restorationists must learn how to cope with and manage fire.

With all this in mind, can our friends from GECI initiate a sustainable restoration process on the entire island, ideally within a coherent conservation, management, and restoration plan? Also, can the restoration work underway serve as a prototype for restoration on other islands, e.g., Mauritius and Madagascar where MBG scientists are already working?