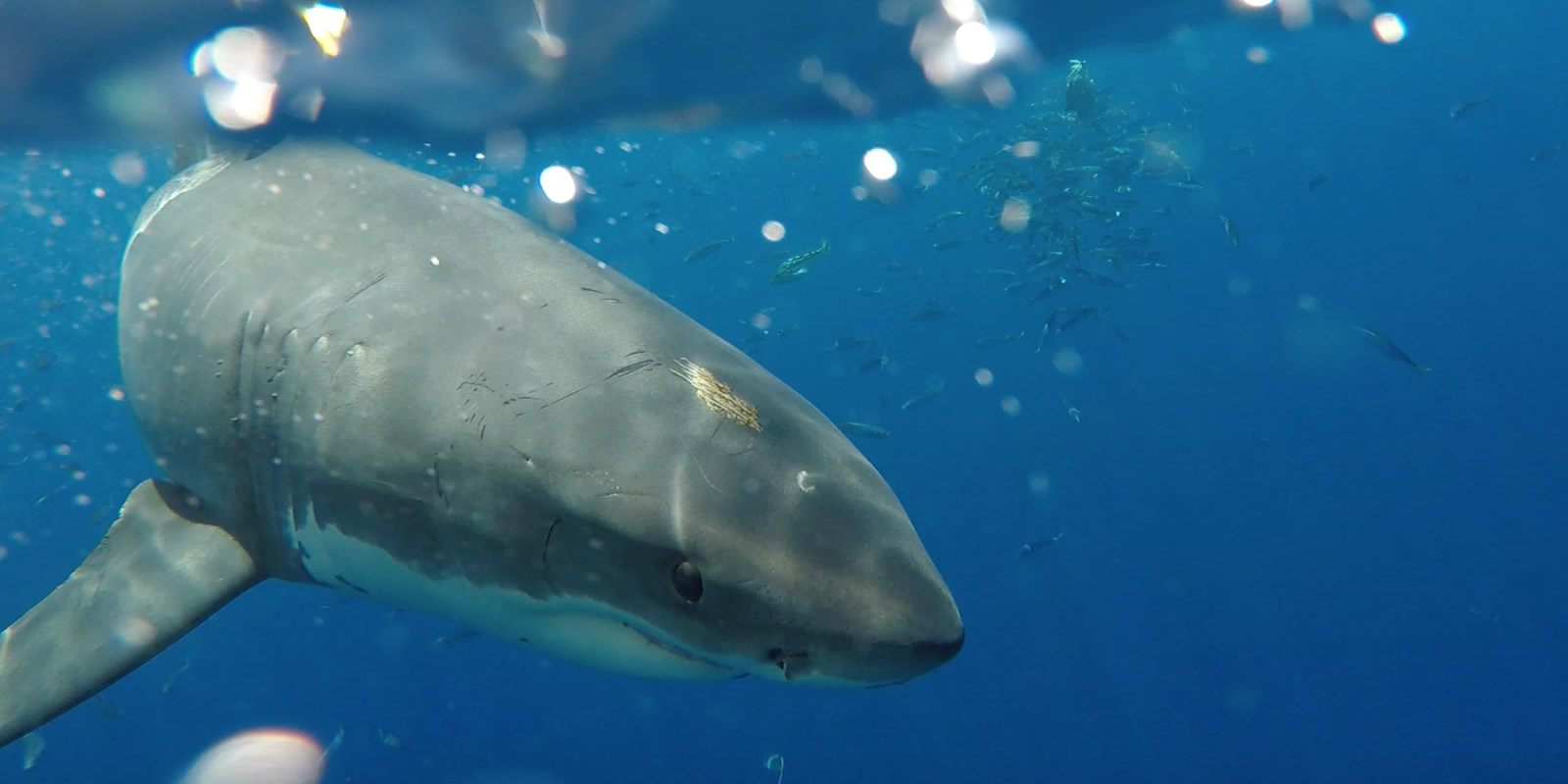 There are a small handful of locations around the globe where cage divers, and non-certified divers can encounter great white sharks and for divers that place is Guadalupe Island, Baja. For divers and non divers arriving in California, one of the best places in the world to dive with great whites is practically in our own backyard 120 miles south of San Diego.

Over the past 18 years Guadalupe Island has emerged as a leading destination for great white shark encounters with its initial discovery by America’s Shark Boat in 2000. As many as a dozen different animals routinely seen during a normal five-day trip, and the sharks have grown accustomed to divers, often hanging out amongst the cages for extended periods. The underwater visibility at Guadalupe Island is excellent exceeding 100 feet.

The great white shark (Carcharodon carcharias) is the largest of the toothed sharks. It can grow up to 2o feet long with Deep Blue a female we named in 2005 topping that list as largest shark in the Pacific she weighs in at over 4,000 pounds at 20 feet long from tail to snout. The sharks found at Guadalupe Island average about 15 feet in length. A male white shark reaches sexual maturity at around age 10. A female white shark may take up to 15 years to reach sexual maturity and we see a lot of these animals in late October each season. Almost nothing is known about great white shark mating and reproduction. It is known that females are ovoviviparous, which means eggs develop and hatch in the uterus and pups continue to grow until birth. Gestation is approximately an 11-month period.
About Mexico’s Guadalupe Island
Guadalupe Island is volcanic in nature, covered with towering cliffs, cinder cones, and plugs. It has a kind of rugged beauty that makes it the perfect backdrop for experiencing the raw beauty of an apex predator like the great white shark. The color in the cliffs defies words. Adentro (inner) Island, a rock at the extreme southern tip of the island, glows orange in the morning sun, and the cliffs above Spanish Bay show off colorful strata from thousands of years of lava flows. The island vegetation is rather sparse due to centuries of foraging by wild goats, although the natural flora is slowly coming back since most of the goats have been eliminated. Offshore, the waters are teeming with thick schools of fish, green sea turtles, Guadalupe fur seals, California sea lions, elephant seals, and lobster. The only human inhabitants of Guadalupe are a small Mexican Navy Base at the south end of the island and a fishing village close by.
The earliest human visitors came to the island to hunt seals and sea lions. They took all they could find. However, a few Guadalupe fur seals and northern elephant seals escaped the hunters, presumably by retreating into small caves. The caves of Guadalupe are directly responsible for these two species surviving the threat of extinction at the hands of seal hunters.
The Cage Diving Experience at Guadalupe Island
Shark cage diving expeditions to Guadalupe Island are typically five days in length aboard liveaboard dive boats. It takes a day to get to the island and another to get back, allowing for three full days of cage diving. America’s Shark Boat depart from San Diego and anchors near the north point of the island at Prison Beach, the site of an abandoned Mexican prison. We also call this location Shark Fin Bay.
Non Certified Cage Divers at Guadalupe Island
America’s Shark Boat encourages non scuba certified to dive in our cages. We have been creating shark divers since 2000. Our onboard cage diving lessons provides the basics, including how to breathe from and clear the hookah regulator, equalization and ear clearing, and how to clear a flooded mask.

We try hard to keep our charter prices as low as possible while also offering the best services for a US flagged liveaboard dive boat. If you see a competitor great white shark adventure with a comparable vessel and dive charter timeframe with a lower price, take advantage of our Low Price Cage Guadalupe Diving Guarantee. Just reach out to us with the competitors offer and save some cash. Save money and join us cage diving this year with great white sharks!. Let’s dive!