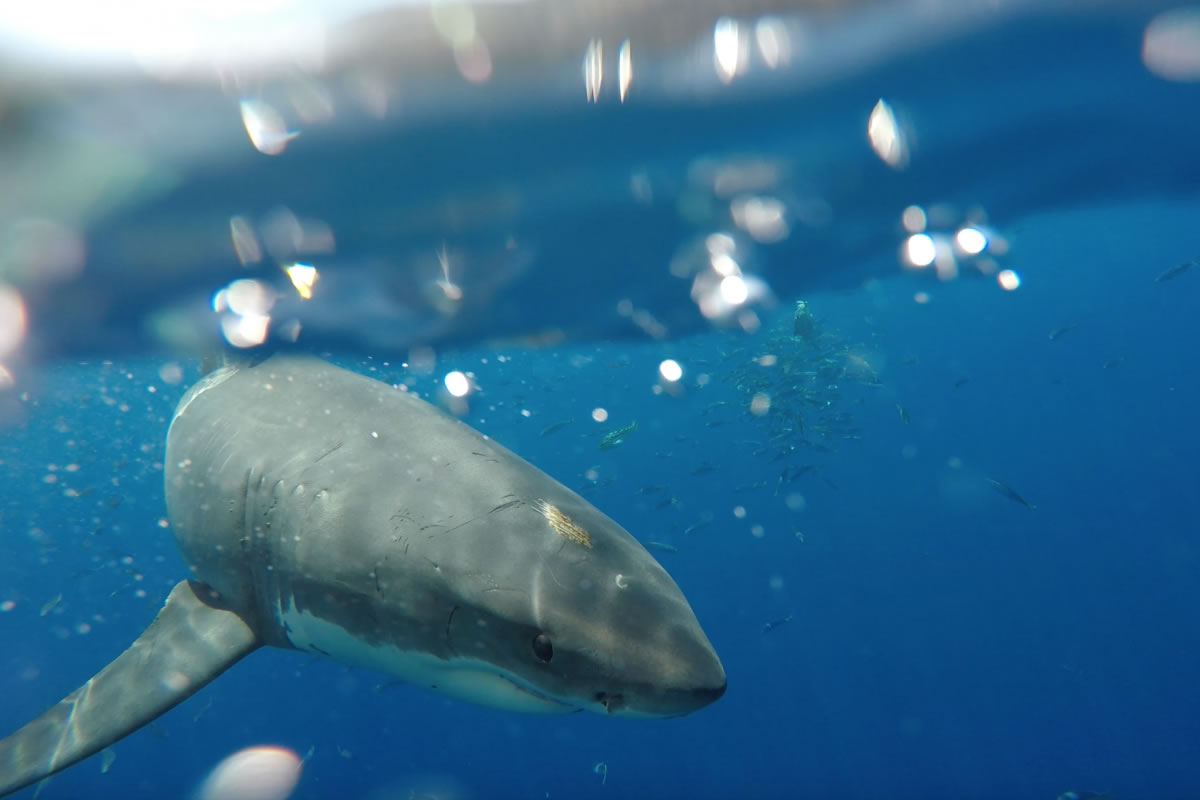 Great white sharks (Carcharodon carcharias), also known as great white, white pointer, white shark, or white death, are fish, and are in the Lamnidae family of sharks. This family includes the salmon and mako sharks. Lamnidae sharks are warm-blooded (partially endothermic) and intelligent. Great white sharks are one of the most notorious predators, and as such offer some of the best shark diving opportunities on the planet.

Size –  Great white sharks can reach and likely exceed 21 feet in length (6.4 meters) and weigh 7,330 pounds (3224 kg). The larger great white sharks may occur in colder waters such as the food-rich cold waters of the North Pacific and Arctic Oceans. At Guadalupe Island Deep Blue, a shark we named in 2015, was the first recorded 20 foot female in the Pacific.

Age – Great white sharks reach maturity around 15 years of age and have a life span of over 30 years. Most fish are aged using bony structures called otoliths; however, sharks do not have bones, making it difficult to age them.

Reproduction –  Mating requires the male shark to secure the female by grabbing her with his mouth and inserting his clasper organs into the female for copulation. Females may have bite marks along their flanks and on their pectoral fins indicating she had recently mated. White shark mating is apparently not a gentle affair, but this may be further evidence that great white sharks have a limited sense of pain.

In and study observing and measuring social behavior of great white sharks is difficult as they don’t allow for easy observation especially in the often cloudy waters off Alaska. Still, evidence is mounting that indicates sharks are socially complex and benefit from these qualities. Feeding hierarchies may be established at locations with abundant prey such as seal and sealion rookeries at Guadalupe Island and floating whale carcasses. An observed attack on beluga whales in Cook Inlet indicates what appeared to be a complex, cooperative attack. This is of special interest because the opaque water reduced or eliminated visual cues during the attack.

Satellite tags attached to great white shark dorsal fins have revealed that they are highly migratory, just like salmon sharks, and migrate between Guadalupe Island Baja California and Hawaii, between Australia and South Africa and between South Africa and the Indian Ocean.  The migration swimming speeds appear to be steady and the distance covered annually can exceed 12,000 miles (20,000 km). When the Baja-Hawaii white sharks arrive in the Hawaiian Islands their swimming behavior changes to shallower excursions, but the reasons for these migrations and differing behaviors remain a mystery. White sharks were noted using Alaska waters in the 1970s, but as more observations have been compiled they appear to use Alaska waters year round. It is not known how far north in the Bering Sea white sharks travel, but their travels are likely limited only by food availability; if they secure enough food they likely can use even Alaska’s coldest marine waters.

Great white sharks can be found patrolling nearshore waters as they search for prey and they appear to be regular visitors to the waters of Southeast Alaska, off Yakutat, in Prince William Sound and they have been seen several times in Cook Inlet, along the Alaska Peninsula and in the Aleutian Islands. They likely also use offshore waters much like salmon sharks where they find concentrations of prey.

Great white sharks are opportunistic, but, like other predators, individual white sharks likely become proficient at taking a few prey species and other prey species only irregularly. The reason for this is that the techniques for locating and safely securing large and dangerous prey are different for each species preyed upon. For example, an adult white shark that’s learned to take seals may have learned to drag the adult seals to the bottom until the prey has drowned after which it is consumed. Larger more dangerous prey such as adult elephant seals are more likely to be struck from behind and allowed to bleed out and die before the shark returns to feed; or, for another individual great white shark, relentless and continued attack may be preferred. A great white shark that is successful with a certain prey species may be less likely to bother learning the necessary skills and techniques needed to diversify its diet. Some great white sharks have learned to scavenge whales killed by orcas. Adult great white sharks tend to prey more on marine mammals than fish, preferring prey with high contents of energy-rich fat.

Only a few great white sharks have been documented to have been killed by people in Alaskan waters and these were caught incidental to catching salmon. Since we know very little about the great white sharks found in Alaska we don’t know if these catches are significant for the population; we don’t even know if the great white shark population in Alaskan waters is seasonal and transitory or stable with sharks plying secretively year around.  But their secrecy may be their best strategy for their long-term survival in sub-arctic and arctic waters.