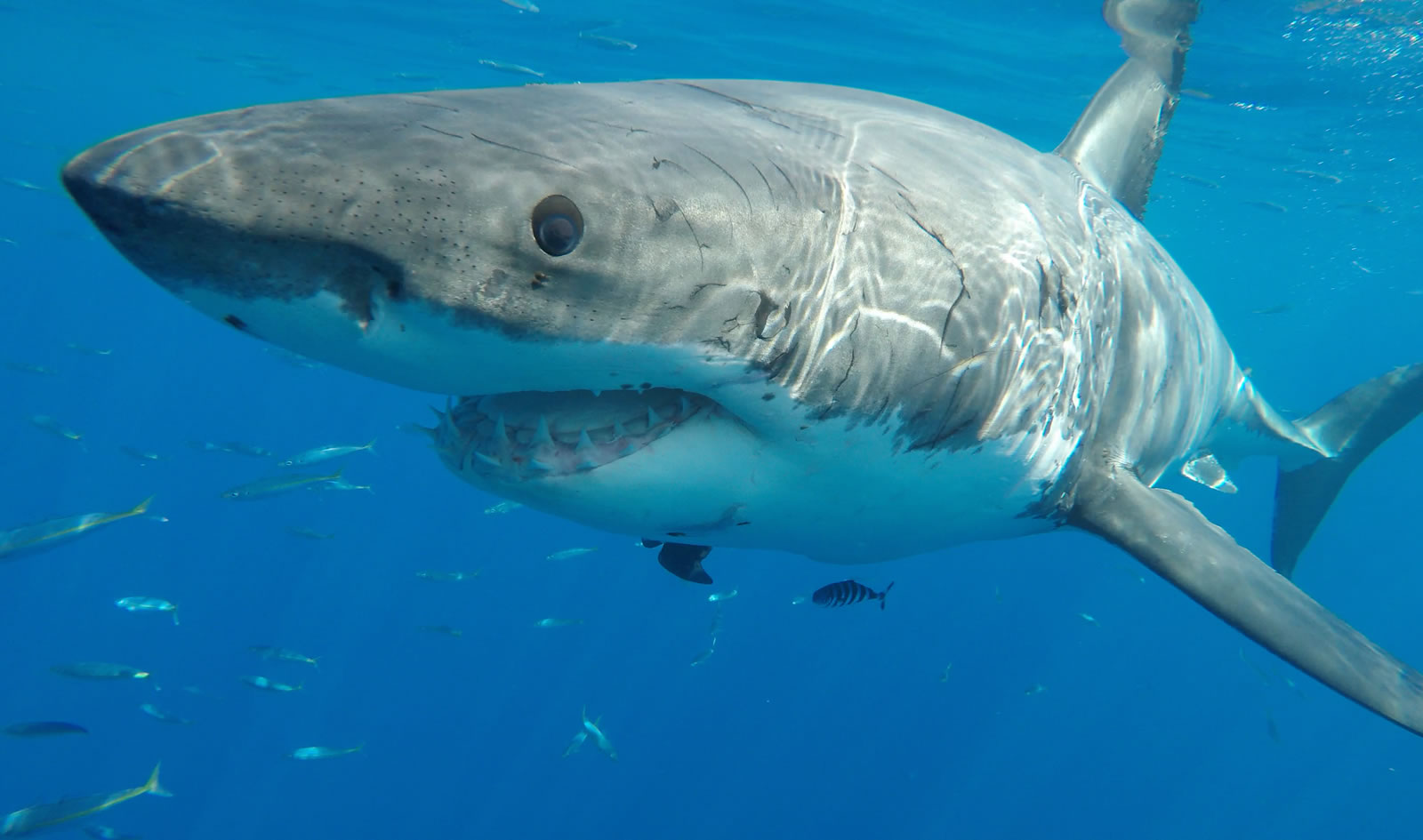 If you’re considering knocking off bucket list shark cage diving at the island of Guadalupe you’ll need some fun facts about this remote cage diving destination off the Pacific coast of the Baja Peninsula in Mexico. Let’s dive!

During the Guadalupe shark season, there are two different shark diving timeframes to take advantage of. From Aug to Sept, very active males frequent the island. This is an amazing time in terms of best shark diving weather and most numbers of active sharks. From Oct-Nov massive breeding aged female white sharks arrive during The Time of the Titans. Since 2003 we now know Guadalupe island is a mating hotspot for great white sharks.

Mature white shark females are often be seen around Guadalupe island sporting gruesome bite marks and other scratches. Sharks like Scarboard, and Lucy and Deep Blue all bear the scars of tell tale violent mating rituals with eligible males. To mate successfully, white shark males at Guadalupe Island must hold onto the female by biting the area around the gills and pectoral fins (good luck) and these females can top out at 4000lbs, it’s a mating dance that only white sharks can pull off!

How Many Great White Sharks Are There at Guadalupe Island 2022?

Guadalupe does have a human population of just over 200 individuals. These inhabitants are mostly abalone and lobster fishermen who survive thanks to generators and a military vessel, which provides 30,000 liters of fresh water annually. There is also a shark research station on the island that provides invaluable data on the ocean’s most fearsome predator.

Guadalupe is home to large numbers of great white sharks because of the endemic fur seal population, california sea lion, and elephant seal populations here. In 2018 we hosted a Shark Week crew looking to film the first ever predation of a fur seal by a white shark the show will air in 2022!  One of six fur seal species in the world, The Guadalupe Fur Seal was once pushed close to extinction by commercial sealers in the 19th Century. Luckily, the fur seal population has since recovered to numbers in excess of 10,000. Great whites feed on these animals regularly at sunset and sunrise, while midday antics by seals nipping the tails of great white sharks can be seen from sharks cages on our boat.

Book Today With America’s Shark Boat and SAVE!

Safety and shark diving value is a primary concern for us and we have the best safety record in the shark diving fleet. Not only is our U.S. crew the most experienced dive operator at Guadalupe Island (19 years and counting), but they are all federally licensed and participate in the U.S. Coast Guard’s random drug testing program. Over the many years we have been cage diving at Guadalupe island we have remained the value shark boat. Offering shark cage diving for less, and the place shark divers call home with a return rate that is the envy of the fleet. We love our shark divers and they love us. Make this the year you do something incredible on your next shark vacation. The year you get to experience cage diving with great white sharks at the most amazing shark location in the world.

We’ll price price match and beat ANY comparable vessel offer you see online. You don’t need ‘mints on your pillow’ to cage dive with great white sharks at Guadalupe Island. You just need great food and accommodations, a seasoned shark diving staff, lots of great white sharks, savings over everyone else, and the vessel that started it all – America’s Shark Boat. Let’s dive!