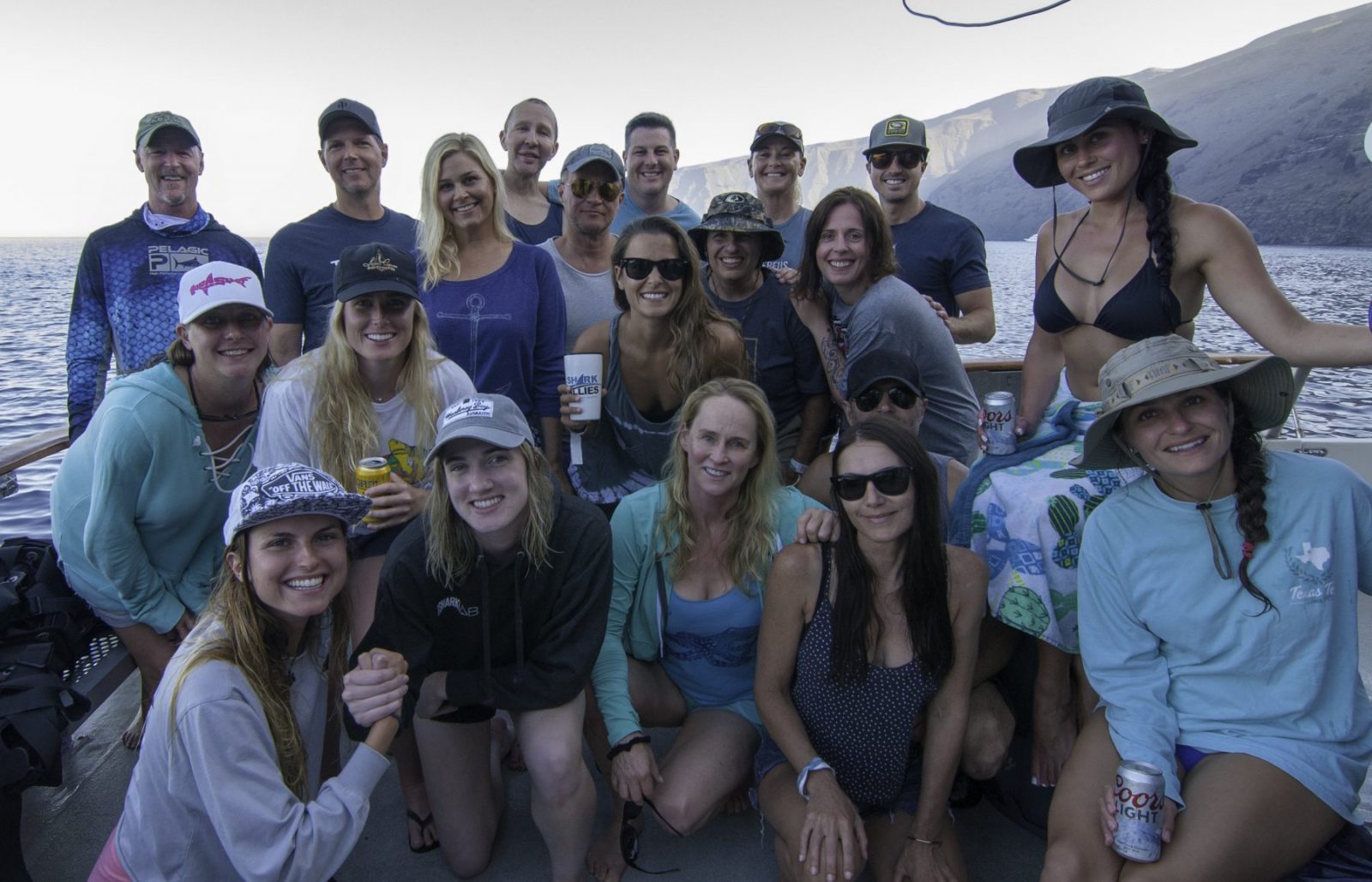 In 2018 we first hosted the world renowned Shark Doc, AKA Shark Weeks Dr Craig O’Connell, onboard America’s Shark Boat at Guadalupe Island, it was the beginning of a great relationship. You may recognise Doc from Shark Week, as he has been featured on some of the best science based Guadalupe Island, Tiger and Bull shark shows over the years.

This year 2023 we are once again hosting another amazing group of shark divers along with the good Doctor for season #23 at Guadalupe Island. Join him in November (TBA) during the Time of the Titans and explore the amazing world of great white sharks at Guadalupe Island together.

Over the course of this unique and special shark expedition to Guadalupe Island you will learn about shark biology, ecology, behavior and the intricate relationship we, as humans, have with sharks with Dr Craig O’Connell.

Let’s explore the wild world of sharks together at Guadalupe Island with the stars of Shark Week!

Time and again, our shark divers tell us that they like to cage dive on America’s Shark Boat so they can meet new people and challenge themselves by learning a new skill, like shark diving. Our shark crew are professional shark divers, but that doesn’t mean you have to be. We designed our cage diving adventures for non certified divers, offering a shark diving vacation that is safe, and out of the ordinary.

While you may see conservation lead shark diving as the ultimate adventure – a bucket list item you want to cross off your list. In fact, it is much more than that. By spending time with sharks and embarking on this adventure with passionate people and experts, you will have a much deeper experience. You will be more than a spectator. You become a participant.

The knowledge you acquire will boost your confidence and open up possibilities.

This trip is a perfect introduction to shark diving. It will prime you for more shark adventures in the future.

At the very least, this adventure will be an unforgettable experience whether you share it with your friends or connect to new ones on the boat. Nothing creates more of a bond than traveling together on a challenging quest. Feeling the emotional roller coaster of seeing something awe-inspiring and pushing yourself a little outside your comfort level, of challenging your mind and body. Ready to experience a great white shark in person?

We are thrilled to have Shark Weeks Dr Craig O’Connell join us again this year. Dr Craig O’Connell is a marine biologist, one of the four inventors of Sharksafe, and the mind behind the utilization of ceramic magnets to deter large predatory sharks. He earned his PhD from the University of Massachusetts Dartmouth (2013) and is the PI of the scientific tests performed on Sharksafe.

He and his wife, Nicolle O’Connell, are co-founders of Montauk-based O’Seas Conservation Foundation, which yokes its various conservation efforts to youth education programs.  Both are doctors — he’s a marine biologist, she’s a pediatrician.

O’Seas Conservation Foundation implements shark conservation strategies to preserve the delicate balance of the world’s oceans while integrating hands-on, field-based activities to inspire environmentally-conscious youth. Based in New York, OCF conducts field studies worldwide, but maintains a special focus on the shark, skate and ray fauna in their local waters. OCF is a two-time recipient of the PADI Grant for conservation work in Bimini and also their New York white shark nursery research.

Welcome aboard America’s Shark Boat! Your Guadalupe Island shark cage diving adventure starts right here. Meet Stephanie and her team in San Diego and let our our helpful crew members show you to your vessel accommodations and get you settled into your cage diving home away from home for the next few days. Ship orientation and departure tonight. Guadalupe Island and great white sharks here we come!

After leaving San Diego Bay we enter Mexican waters while passing Islas Coronados.  We are now officially on our way to Guadalupe Island for the best cage diving with great white sharks in the world. Today is a day of travel and relaxation while the crew prepares for the next few days of shark diving. This is your chance to get your sea legs and get prepared for tomorrow and your first cage dives with the white sharks of Guadalupe!

Welcome to the “Island of the Great White Sharks,” Guadalupe Island! Our shark cages are deployed by 7:00am each morning with white shark encounters to follow for the entire day. You may take a break at lunch, depending on the mornings viewing activity, and we will stop sharking at last light from the mountains each day when the sharks start their nightly seal hunt at depth. Plus, dinner is calling in the galley. Oh, and one last thing, when you go to sleep tonight know that just a few feet away from your bunk, white sharks are prowling below you, sleep tight!

Main day shark diving for everyone. By now you are a newly minted Horizon Charters Shark Diver, congratulations we knew you could do it!

Your expedition leaders will be your buddies on board and in the water. The group dynamic will be collaborative and equal – sharing advice, assisting each other and making sure everyone is getting the most out of their time with the sharks. When we are finished with diving, we will casually gather to share short presentations that give a deeper insight into the world of shark conservation and the challenges ahead. (It is up to you whether you would rather chill on the top deck or continue chatting about sharks.) The focus will be on encouraging discussion and lots of interesting conversations about shark activism, media and conservation.

Our goal is to inspire and be inspired and to give everyone a chance to take an active role in the mission to protect our magnificent sharks.

We open the shark diving pool at first light and with a small group of shark divers aboard, usually half of the divers are in and half are out of the water on 1 hour cage diving rotations that will last another full day today. Enjoy an epic dinner tonight, as we always celebrate our Guadalupe shark divers on Day 3!

On Day 4 we depart Guadalupe island shortly after lunch for San Diego. This is your last chance to say goodby to our great white shark friends, and for your last cage diving moments at the island. Be sure to have your cameras ready as we pass the famous Shark Fin Rock on the way back. Adios Isla Guadalupe!

We travel north to San Diego, California for a 3:30 to 5:00pm arrival in port. We will arrange your shuttle to the airport or your local accommodations. Farewell shark divers, it was exciting while it lasted, stay with us on Facebook where we’ll keep you up to date with the island and your new sharky friends. Congratulations! You are officially a shark diver!