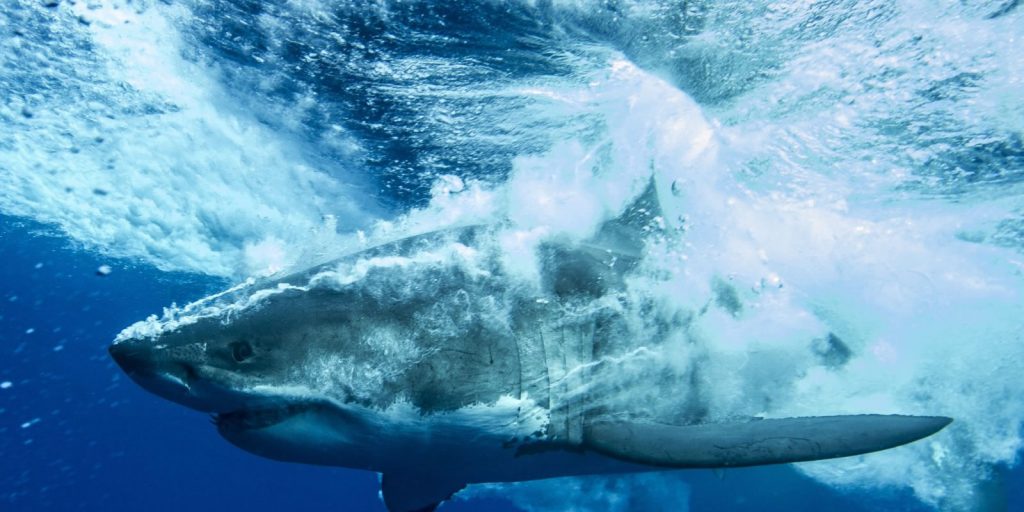 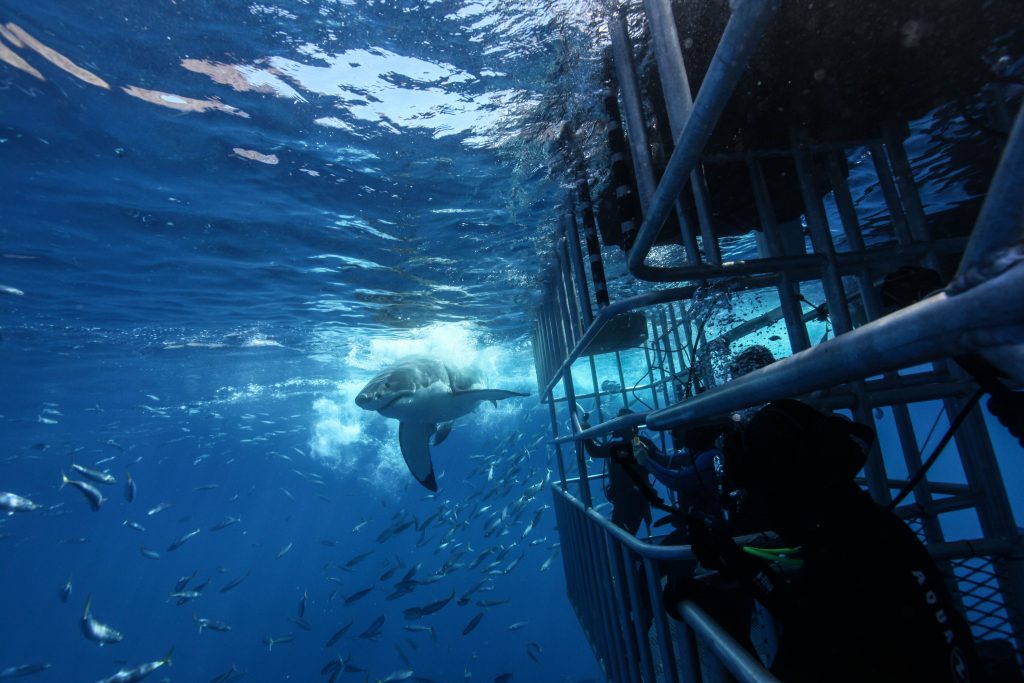 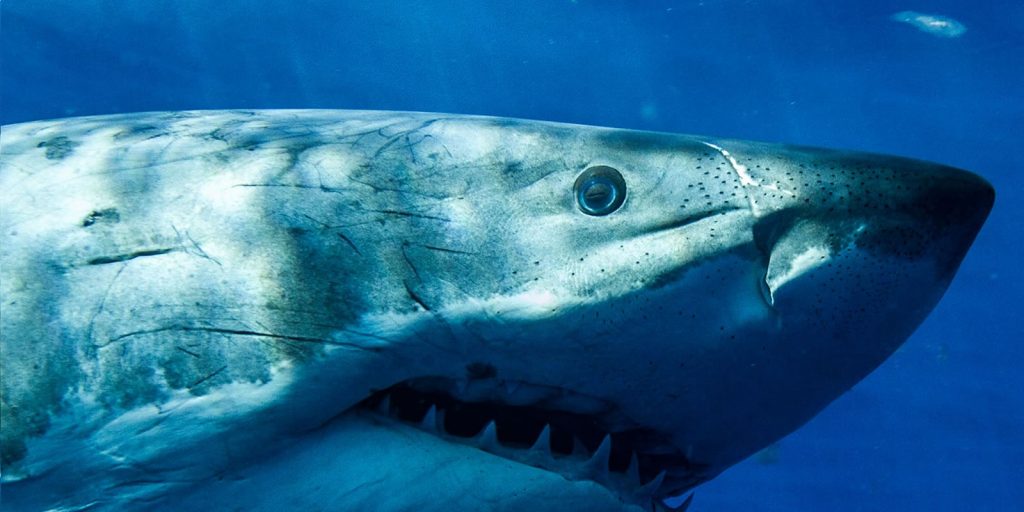 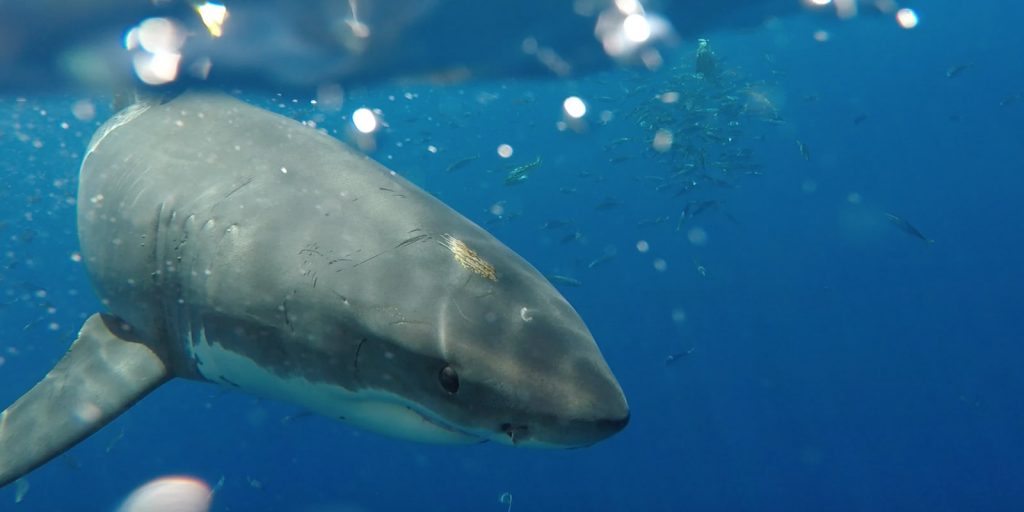 Great White Shark Diving For Everyone 2023

Guadalupe Island. You could spend a lot more money cage diving with great white sharks this year…but why would you?

We specialize in taking non certified divers, or first time shark divers, into the exciting world of great white sharks (Carcharodon carcharias). Dive with us and discover hands on shark research and shark conservation at Guadalupe Island. Shark diving for everyone is our commitment to showcase the incredible world of white sharks with a combination of 20 years of cage diving experience, a cage system designed exclusively for non divers, top notch shark staff and cage diving crews with years of hands on shark experience. We have been cage diving and naming many of the white sharks you’ll be diving with this year. From the incredible 19+ foot Deep Blue, most likely the largest great white shark in the Pacific, to many of our regular white sharks like Scarboard, Lucy, and Mau. These amazing animals have become more than just whites sharks to us as we encounter them year after year – we met Scarboard 16 years ago – they have become our sharky friends.

We’re excited to announce several shark diving research cage diving expeditions in 2023. Shark research is ongoing at Guadalupe Island, and this year we’ll be hosting Shark Weeks Dr. Craig O’Connell. You know him from Jungle Sharks, Sharks Among Us, Shark Island, Ninja Sharks and Great White Invasion to name a few fintastic shark programs. Dr O’Connell will be with us to share his knowledge of white sharks and shark research on our November 2023 cage diving expeditions (TBA). November at Guadalupe Island is also known as the “Time of The Titans” when the largest sharks of the season prowl the waters of the island looking for seals.

We’ll also be hosting Shark Weeks marine CSI expert Alison Towner. When dead white sharks started washing up on beaches in South Africa, shark researcher and Shark Week star, Alison Towner was on the case. She’ll be on America’s Shark Boat as our special guest to answer all your questions about great whites in August 2023 (TBA)!

Alison graduated from UK’S Bangor University in 2006 with a BSc hons degree in Marine biology and works at Marine Dynamics is South Africa. Alison and her team conducted necropsies on the five white shark carcasses and tracked the infamous pair of killer whales ‘Port and Starboard’ who were responsible for the predations in Gansbaai between 2017-2019. This research went viral and was featured on Discovery Channel’s Shark Week as part of the Air Jaws series. You’ll see Alison Towner again this year on shark week 2021 on two different shark week shows including a return to the Air Jaws franchise. Let’s dive!

In 2003 we initiated the CICIMAR/U.C Davis white shark tagging and research program at Guadalupe Island with a young graduate student Mauricio Hoyos. Today, almost 20 years later, Dr Maurico Hoyos leads International teams of shark researchers to this unique destination to tag and study the lives of great white sharks in the Pacific. Our shark crew have been involved in many of these Guadalupe Island white shark projects including the groundbreaking REMUS Woods Hole Oceanographic autonomous drone study that showed, for the first time, actual deep water predation by great white sharks. Shark tagging at Guadalupe Island has shown symbiotic relationships with seals in the region and long distance migrations by some of our larger females as far away as the Oregon coast!

Additionally, we have been involved from the early inception of the Marine CSI white shark photo identification book. Many of the Guadalupe Island white sharks (Carcharodon carcharias) named in the book were named by our divers and crews since 2003. On your next cage diving adventure with us you’ll meet these research teams and get to know the secret lives of sharks at Guadalupe Island.

Book 2023 Today With America’s Shark Boat and SAVE!

For just $500 down you could be on your way to cage diving with great white sharks at Guadalupe Island this year. We know you have a choice of liveaboard shark diving vessels for Guadalupe Island this year. Since 2000 we have watched the liveaboard shark fleet grow, and grow, and grow. Safety and shark diving value is a primary concern for us and we have the best safety record in the shark diving fleet. Not only is our U.S. crew the most experienced dive operator at Guadalupe Island (20 years and counting), but they are all federally licensed and participate in the U.S. Coast Guard’s random drug testing program. Over the many years we have been cage diving at Guadalupe Island we have remained the value shark boat. Offering shark cage diving for less, and the place shark divers call home with a return rate that is the envy of the fleet. We love our shark divers and they love us. Make this the year you do something incredible on your next shark vacation. The year you get to experience cage diving with great white sharks at the most amazing shark location in the world.

We’ll price price match and beat ANY comparable vessel offer you see online. You don’t need ‘mints on your pillow’ to cage dive with great white sharks at Guadalupe Island. You just need great food and accommodations, a seasoned shark diving staff (23 years), lots of great white sharks, savings over everyone else, and the vessel that started it all – America’s Shark Boat.

We’ll be waiting for you. Let’s go shark diving!

Welcome aboard America’s Shark Boat! Your Guadalupe Island shark cage diving adventure starts right here. Our helpful crew members will show you to your vessel accommodations in San Diego and get you settled into your cage diving home away from home for the next few days. Ship orientation and departure tonight. Guadalupe Island and great white sharks here we come!

After leaving San Diego Bay we enter Mexican waters while passing Islas Coronados. We are now officially on our way to Guadalupe Island for the best cage diving with great white sharks in the world. Today is a day of travel and relaxation while the crew prepares for the next few days of shark diving. This is your chance to get your sea legs and get prepared for tomorrow and your first cage dives with the white sharks of Guadalupe!

Welcome to the “Island of the Great White Sharks,” Guadalupe Island! Our shark cages are deployed by 7:00am each morning with white shark encounters to follow for the entire day. You may take a break at lunch, depending on the mornings viewing activity, and we will stop sharking at last light from the mountains each day when the sharks start their nightly seal hunt at depth. Plus, dinner is calling in the galley. Oh, and one last thing, when you go to sleep tonight know that just a few feet away from your bunk, white sharks are prowling below you, sleep tight!

Main day shark diving for everyone. By now you are a newly minted Horizon Charters Shark Diver, congratulations we knew you could do it! We open the shark diving pool at first light and with a small group of shark divers aboard, usually half of the divers are in and half are out of the water on 1 hour cage diving rotations that will last another full day today. Enjoy an epic dinner tonight, as we always celebrate our Guadalupe shark divers on Day 3!

On Day 4 we depart Guadalupe Island shortly after lunch for San Diego. This is your last chance to say goodby to our great white shark friends, and for your last cage diving moments at the island. Be sure to have your cameras ready as we pass the famous Shark Fin Rock on the way back. Adios Isla Guadalupe!

We travel north to San Diego, California for a 3:30 to 5:00pm arrival in port. We will arrange your shuttle to the airport or your local accommodations. Farewell shark divers, it was exciting while it lasted, stay with us on Facebook where we’ll keep you up to date with the island and your new sharky friends. Congratulations! You are officially a shark diver!