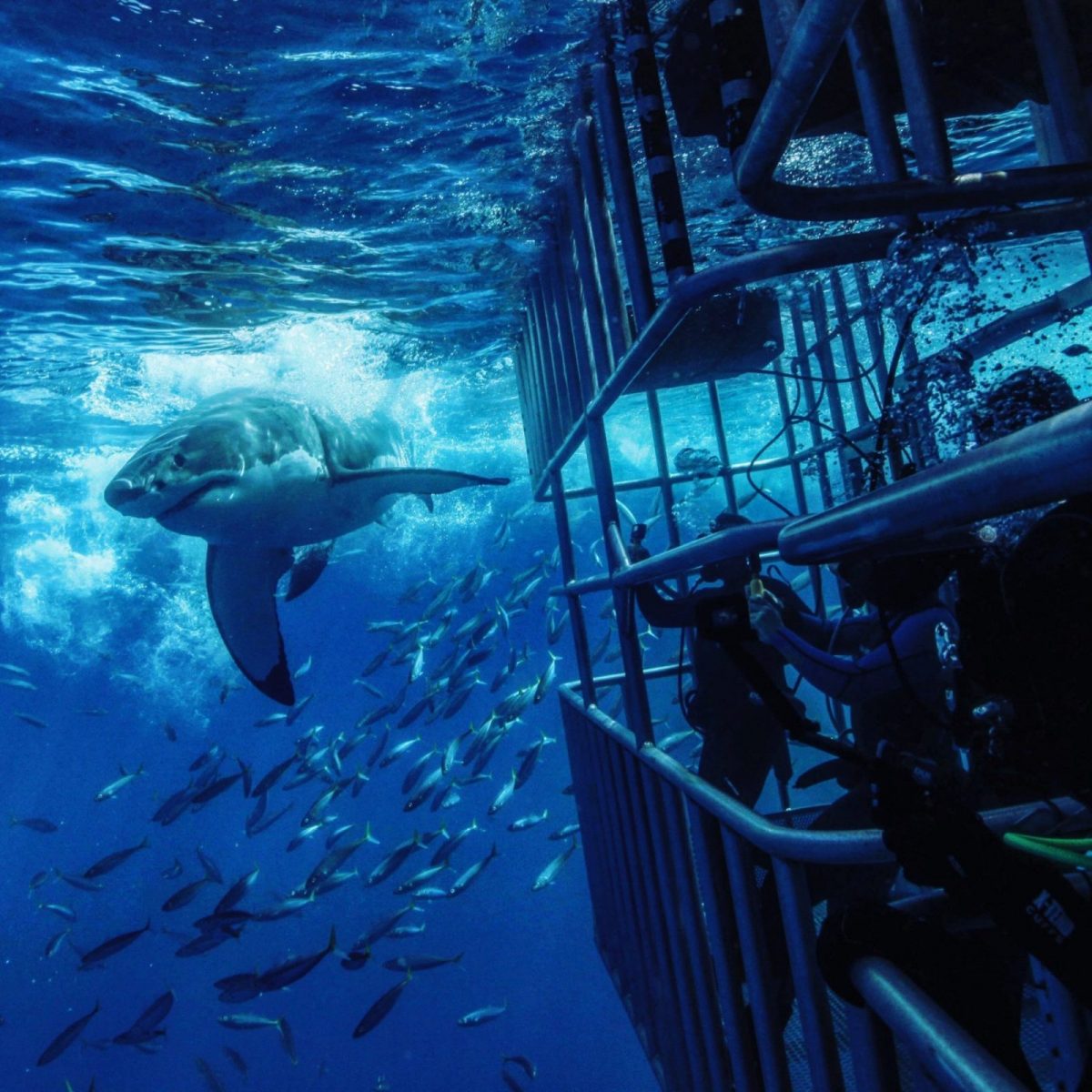 Shark diving. It’s really grown over the past 21 years we have been cage diving at Guadalupe Island so we compiled a collection of the world’s 5 best shark diving destinations for your review. Swimming and cage diving with sharks is a bucket list adventure, no matter the species you encounter, from great white sharks to cute lemon sharks and beyond. Let’s go shark diving!

For shark divers and shark adrenaline junkies who want the ultimate big shark encounter, Guadalupe Island delivers. Since 2000 when America’s Shark Boat first discovered white sharks here it has, arguably, become the world’s best place to cage dive safely with great white sharks. Great white shark encounters at Guadalupe Island are nothing short of spectacular, expect multiple animals per day in crystal clear waters and best of all you do not need to be dive certified to shark dive in the cages here. The MV Horizon boards in San Diego – no busses into Mexico- ever, and delivers 5 days of the the best shark adventure you will ever have. The only problem with Guadalupe Island white sharks is how do you follow this adventure up?

Considered one of the best shark dives in the world, Fiji’s Beqa Lagoon is famous for encounters with as many as eight species of sharks at one time, including tigers, bulls, sicklefin lemons and many more. The long-running feeding program happens at the Shark Reef Marine Reserve, a marine park created specifically for research and conservation of sharks. The departure point for the shark dive is Pacifc Harbour on Viti Levu.

Drawn by schools of spawning snapper, whale sharks show up like clockwork at Belize’s Gladden Spit between the months of March and June. This experience is open to both divers and snorkelers, as whale-shark sightings near the surface are common when the animals surface to feed. The best days for whale-shark encounters of the Placencia coast are around the full moon each month of the season, when the spawning action reaches its zenith.

For underwater photographers and adventurers who are keen to get up close and personal with tiger sharks, there’s one place that’s on everyone’s bucket list. Tiger Beach in the Bahamas is a shallow sand fat where divers not only get within touching distance of multiple tiger sharks, but also Caribbean reefs, lemons and occasional hammerheads that join the scrum.

The original home of great-white cage diving can be found in one of the wildest corners of the ocean. The southern sea of South Africa is a hotbed of shark activity, where apex predators cruise the temperamental waters for abundant local fur seals. Set out from Gansbaai for an undersea safari you’ll never forget when you slip into a cage alongside toothed behemoths the size of school buses.